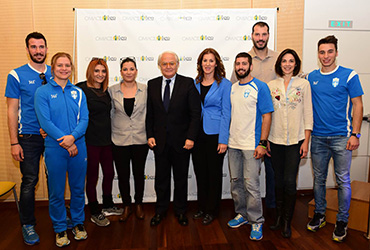 Filoktitis, IASO, IASO Children’s Hospital and IASO General entered a partnership agreement with the Hellenic Olympic Winners Association for the provision of unique healthcare privileges to all Olympic Winners and the Association’s officials.

IASO Group, in this difficult time we experience, shows its support in practice to those people who continue to make us proud internationally. As a result of this partnership, our Olympic Winners and the Association’s officials have now gained access to high quality healthcare services provided by one of the largest Healthcare Groups in Greece, to effectively meet their needs. With this new partnership, the Hellenic Olympic Winners Association shall be a provider of aid and support and a co-organizer in IASO Group’s Corporate Social Responsibility Program “we stand by you” for the realization of health and social awareness promotion actions addressed to the general public.

From her side, the President of the Hellenic Olympic Winners Association, Ms. Voula Kozompoli, thanked IASO Group’s President and Executives, and stated: “It is true that given the nature of our activity, through which we often experience a lot of physical stress and injuries, IASO Group’s and FILOKTITIS’ –Recovery and Rehabilitation Center in Attica and one of the most important in Europe– healthcare services towards us and our family members are quite significant and make us feel safe in a time of uncertainty”.