IASO Children’s Hospital: Successful treatment of one of the most serious anorectal conditions, also known as Persistent Cloaca, of a 2-year-old girl 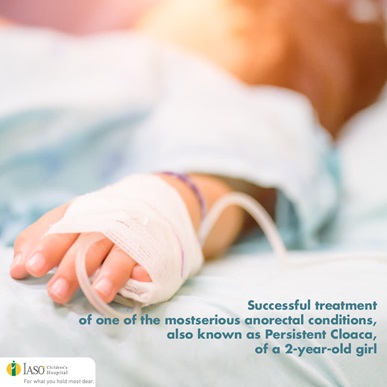 On 07.10.20, a girl was born in IASO Hospital with a single opening in the area of ​​the anus and external genitalia, common to the bowel, the vagina and the urethra. This congenital condition is known as Persistent Cloaca and is the most serious form of anorectal conditions in girls. A colostomy and an endoscopy were performed immediately (9.10.20) to trace out the problem. The endoscopy indicated that there was a double uterus (uterus didelphys) with a septum, at the lower point of which the bowel (rectum) ended, while a part of the urethra and the bladder was above the vagina and the uterus. The vagina and urethra were connected by a common channel that ended in an opening in the skin of the perineum (common urogenital sinus).

The girl has grown normally, without any particular problem and almost a year later (21.09.21), the surgery for the complete anatomical restoration of the anorectal-urogenital abnormality was performed by the team of the Associate Professor Mr. Christos Salakos, Pediatric Surgeon, Director of the Pediatric Surgery Department of IASO Children’s Hospital and the participation of Mr. Peter Cuckow, Consultant Pediatric Urologist of the Great Ormond Street Hospital, associate of IASO Children’s Hospital, which included the complete separation of the three systems by creating an anus, an opening for the vagina and an urethra.

This operation, also known as posterior sagittal anorectal vaginal urethral plasty (PSARVUP), was successful without immediate or late postoperative complications. Finally, the closure of the colostomy and the restoration of the bowel movements from the anus were performed on 17.1.22, with a very good functional result for both the bowel and bladder control.

In recent years, a series of specialized surgeries related to severe urogenital malformations, such as bladder exstrophy, epispadias, severe cases of hypospadias and male-to-female genital reconstructive surgery in cases of sexual differentiation disorders which are due to congenital adrenal hyperplasia or gonadal dysgenesis, have been successfully carried out at IASO Children’s Hospital by the team of Associate Professor Mr. Christos Salakos, with the collaboration of Mr. Peter Cuckow, Consultant Pediatric Urologist of GOSH in London. Furthermore, complications from a previously failed surgical correction of these malformations have also been successfully treated.