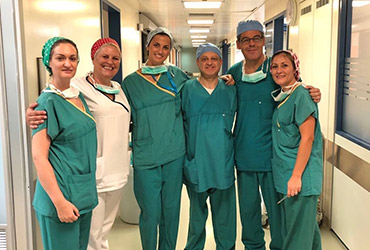 The world’s fourth laparoscopic autologous ovarian tissue transplantation (according to a first review of the international literature) in a patient suffering from vulvar cancer was performed at IASO by Obstetricians-Gynecologists Messrs Iakovos Soussis, MSc. FRCOG, and Andreas Mpazaios, MSc. FRCOG.

During the examination, the physician found an enlarged inguinal gland which was then removed and demonstrated the presence of vulvar cancer. In order to preserve the patient’s future fertility, laparoscopic ovarian transposition was performed. During surgery, ovarian tissue sections were obtained, which were then frozen at the Institute of Life-IASO.

When the right time came and the conditions were favorable, the ovarian tissue was thawed and repositioned in order to restore the physical fertility of the patient who is 40 years old today.

All patients, whether children or adults of childbearing age, prior to undergoing cancer treatment, should be informed on how to maintain their fertility so that they can have a child in the future. With today's possibilities, this does not delay the initiation of cancer treatment.