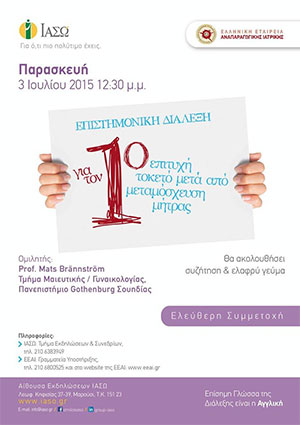 In September 2014, and for the first time in the history of Medicine, a 36-year-old Swedish woman gave birth to a healthy baby following uterus transplantation. According to the researchers, eleven uterus transplantation attempts have been performed worldwide, but this is the first live birth reported. Both the mother and the child enjoy good health and give the hope of childbirth to all women without uterus or with functional uterine abnormalities.

The participation to the lecture was free of charge and the official language was English. Discussion and light meal followed.

Dr. Mats Brännström, Professor of Obstetrics and Gynecology at the University of Gothenburg in Sweden.