Mr. Thanos Veremis, Professor Emeritus at the Department of Political Science at the University of Athens as a special guest of IASO 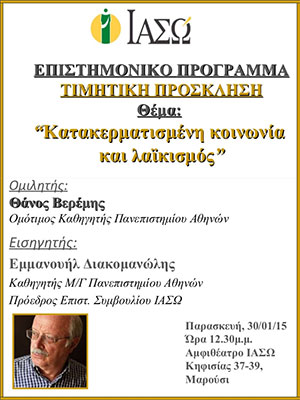 Mr. Thanos Veremis, Professor Emeritus at the Department of Political Science at the University of Athens as a special guest of IASO

IASO has the pleasure of hosting Mr. Thanos Veremis, eminent Professor of Political History at the Faculty of Political Science and Public Administration of the University of Athens, in order to deliver a speech titled “Segmentary society and populism”.

The speech will be delivered on Friday 30 January 2015 at 12:30 p.m. in IASO’s Events Hall and the entrance to the event is free of charge.

Mr. Veremis is specializing in the Political History of Modern Greece and from 1988 to 1994 he served as the Director General of the Hellenic Foundation for European & Foreign Policy (ELIAMEP) and until 2000, as the Chairman of ELIAMEP. Additionally, he was the Chairman of the National Council for Education from 2004 until 2010. Today, he is Councilor to the Municipality of Athens.