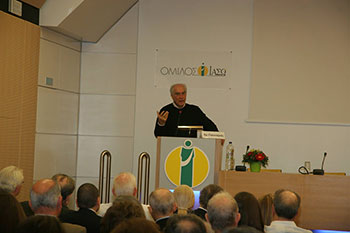 In the context of the Annual Scientific Program of IASO Group and driven by the current economic situation governing our country, IASO Clinic organizes a lecture titled “On today’s Greece: crisis or decline”, on Friday 24 January 2014 at 12.30 p.m., in the Events Hall of IASO Clinic. The prominent Professor of Philosophy, Mr. Christos Yannaras, shall give the lecture and Mr. Emannouil Diakomanolis, Professor of Obstetrics-Gynecology at the University of Athens and Chairman of IASO’s Scientific Board, shall be the Rapporteur of the event.

The Annual Scientific Program of IASO Group includes regular scientific events, aiming to the continuous education, training and updating of all the Group’s physicians on all the recent medical methods and developments in Medicine and particularly in the field of Obstetrics-Gynecology. At the same time, the program contains other topics of general interest, addressed to all well-informed citizens.