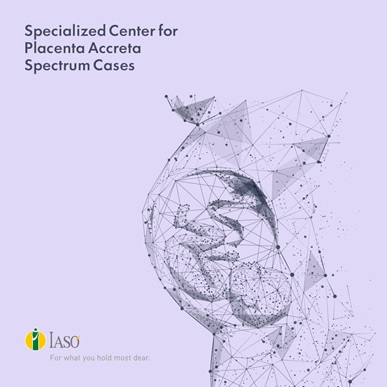 With the establishment of the first “Specialized Center for Placenta Accreta Spectrum Cases” in Greece, IASO Hospital will offer excellent monitoring and utmost safety to women who are diagnosed with placenta accreta spectrum (PAS), being always in collaboration with the Obstetrician-Gynecologist attending them.

IASO Hospital’s Maternity and Gynecology Clinic, which is the largest one in Europe, established the only Center in Greece where the Specialized Team of Doctors, having Mr. Stavros Fotopoulos, Obstetrician - Gynecologist as a Director - Coordinator, treats these cases regularly and efficiently, without the loss of the mother and without significant morbidity after labor. The scientific team has already treated a large number of both scheduled and emergency PAS cases.

An additional innovation within the scope of the new Center is the introduction of the Cell-Saver Intraoperative Autotransfusion System, aiming to limit Heterologous Blood Transfusions, meaning blood transfusions coming from donors.

The benefits and results of the Specialized Center for PAS for mothers and newborns consist of:

The cases of Placenta Accreta Spectrum (PAS) constitute a challenge for Obstetrics. This condition is associated with a high probability of obstetric hysterectomy and hemorrhage, but also with increased morbidity, such as multiple-organ failure, ureter, urinary bladder and colon injury, disseminated intravascular coagulation, as well as the death of the mother in 7% of the cases.

As a previous C-section constitutes the highest predisposing factor for PAS in a subsequent pregnancy, the frequency of PAS cases continues to increase in recent years, as a result of the increase in C-sections.

The increased morbidity and mortality in these cases, as well as the increased frequency of their occurrence, render preoperative planning and preparation necessary. The need to treat PAS cases in Specialized Maternity Centers with a team of specialists and also in well-organized facilities, which are staffed with properly trained personnel and have the necessary infrastructure is highlighted in the International Literature. The labor of patients with PAS in Specialized Centers leads to reduced rates of maternal and neonatal morbidity, as well as a lower number of transfused blood units, in comparison to non-specialized Maternity Hospitals. Furthermore, the mortality of women treated in Specialized Centers due to hemorrhage is recorded to be significantly low.